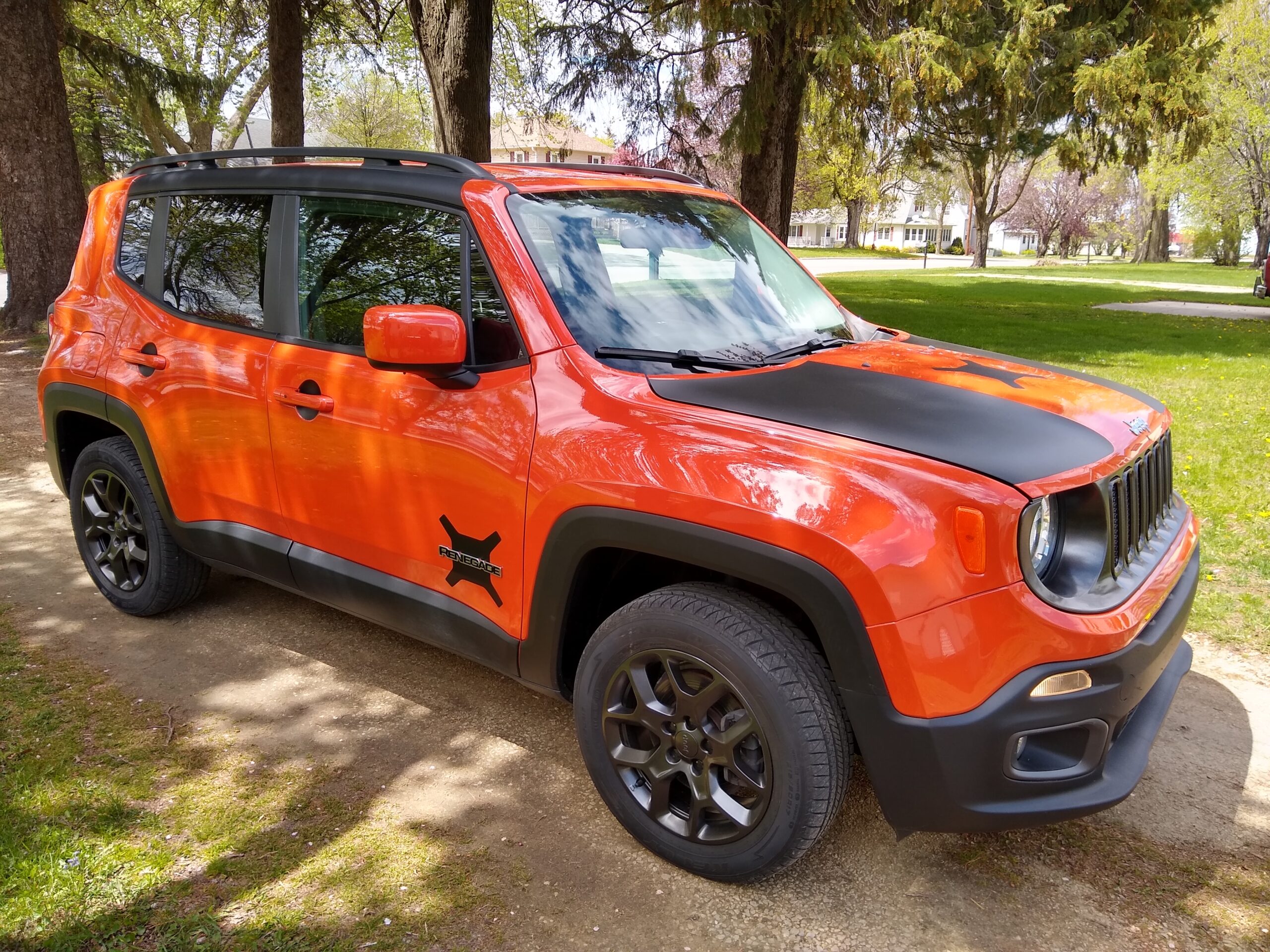 It was time for me to make a vehicle upgrade, my current car has done more that I could have expected with 308,000 miles and no breakdowns that left me stranded I will keep it until it dies and I will continue to use it but it’s just going to be my transportation to work.

When I was looking for a new vehicle I was looking for a long time over a year and I was just having a hard time finding something that was cool enough and functional with the right amount of technology for a good price and then I found this Jeep Renegade. One of the nice things about a Renegade is that there are hardly any differences between a new one and an older one, mine is a 2015. I really like darker color vehicles and prefer black metallic but I found this Omaha Orange Jeep and decided to go for it.

I decided if I was going to buy such a bright Omaha Orange Jeep that I would fire up the vinyl cutter and deck it out with vinyl.

First decided to start with the Renegade emblem on the front doors. Later I will change this decal to a solid instead of an outline.

Next I decided to paint the wheels and I know this isn’t a good idea because of durability but I really thought it would make a big difference and it sure did. I just rattle canned them with Black Night Metallic let the air out and slipped some cut out cheap place mats around the bead and used a silicone rubber cap for the valve stem. If I get the tires changed in the future and the paint flakes off I will get it done by a body shop or buy new painted wheels.

After that I thought the grille would look a lot cooler without the chrome rings and painted the same color as the wheels. To remove the grille you have to remove the whole front bumper as the grille is attached to it from the inside. I have more plans for the grille, I am working on lining the rings with LED fiber optic glow rope. I will update when it finished.

I then moved to the hood and I wanted to be different and didn’t want to copy the Trailhawk and made the decals fit the outer of the hood on the outside instead of the inside single graphic like the Trailhawk but after driving it for a day afterwards it seem just odd looking so I decided to cut a large Renegade logo for the center and that made all the difference.

I also decided to black out the top above the doors but not the whole roof like the Trailhawk. To do this I removed the roof rail racks so I wouldn’t have to trim the vinyl. The next day I made black out finger nail protectors on the indent circle for the door handles and redid the side Renegade logo’s around the door emblems to solid. This was a huge improvement. I did have to make a couple of practice tries with plotter paper for the side roof vinyl and even the outer hood strips.

All that’s left is some decals for the back and to make some website decals. Please comment with any ideas or suggestions.

Update: I added one of those cheap bumper bull bars to hold the front license plate and it looks cool too! I also made a WS2812b LED strip into a daytime running light and turn signal.